Home / Questions / West Battery Corp. has recently been receiving complaints from retailers that its 9-volt...

West Battery Corp. has recently been receiving complaints from retailers that its 9-volt...

West Battery Corp. has recently been receiving complaints from retailers that its 9-volt batteries are not lasting as long as other name brands. James West, head of the TQM program at West’s Austin plant, believes there is no problem because his batteries have had an average life of 50 hours, about 10% longer than competitors’ models. To raise the lifetime above this level would require a new level of technology not available to West. Nevertheless, he is concerned enough to set up hourly assembly line checks. Previously, after ensuring that the process was running properly, West took size n = 5 samples of 9-volt batteries for each of 25 hours to establish the standards for control chart limits. Those samples are shown in the following table: 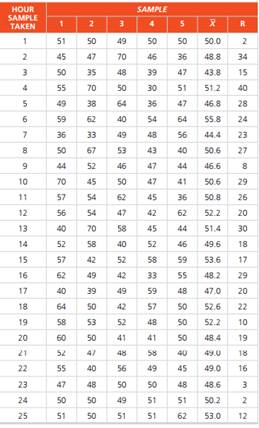 With these limits established, West now takes 5 more hours of data, which are shown in the following table:

a) Determine means and the upper and lower control limits for x and R (using the first 25 hours only).

b) Has the manufacturing process been in control?