Thrifty Markets, Inc., operates three stores in a large metropolitan area. The company’s segmented absorption costing income statement for the last quarter is given below: 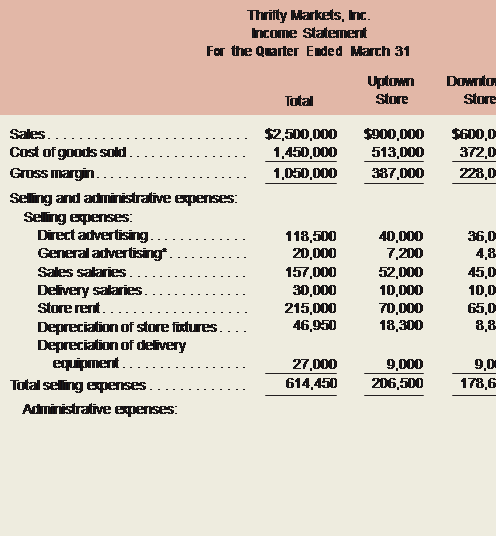 Management is very concerned about the Downtown Store’s inability to show a profit, and consid- eration is being given to closing the store. The company has asked you to make a recommendation as to what course of action should be taken. The following additional information is available about the store:

a. The manager of the store has been with the company for many years; he would be retained and transferred to another position in the company if the store were closed. His salary is

b. The lease on the building housing the Downtown Store can be broken with no penalty.

d. The company’s employment taxes are 12% of salaries.

e. A single delivery crew serves all three stores. One delivery person could be discharged if the Downtown Store were closed; this person’s salary amounts to $7,000 per quarter. The delivery equipment would be distributed to the other stores. The equipment does not wear out through use, but it does eventually become obsolete.

f. One-third of the Downtown Store’s insurance relates to its fixtures.

g. The general office salaries and other expenses relate to the general management of Thrifty Markets, Inc. The employee in the general office who is responsible for the Downtown Store would be discharged if the store were closed. This employee’s compensation amounts to

1. Prepare a schedule showing the change in revenues and expenses and the impact on the over- all company net operating income that would result if the Downtown Store were closed.

2. Based on your computations in (1) above, what recommendation would you make to the man- agement of Thrifty Markets, Inc.?

3. Assume that if the Downtown Store were closed, sales in the Uptown Store would increase by

$200,000 per quarter due to loyal customers shifting their buying to the Uptown Store. The Uptown Store has ample capacity to handle the increased sales, and its gross margin is 43% of sales. What effect would these factors have on your recommendation concerning the Down- town Store? Show computations.