Home / Questions / The income statement for the year ended December 31 2014 as well as the balance sheets as ... 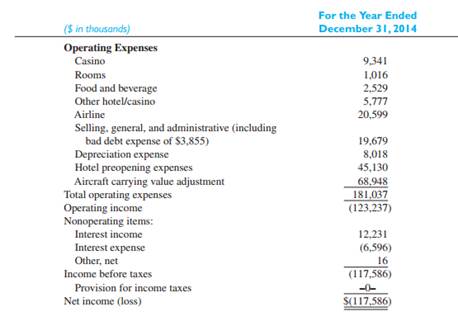 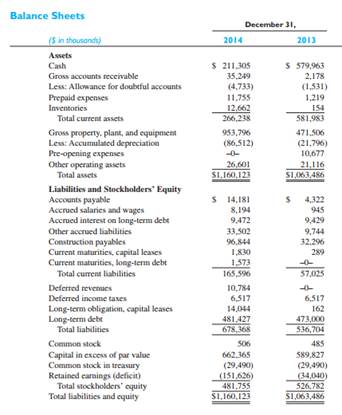 • Aircraft valuation adjustment: The company reduced the book value of its aircraft and related equipment to their expected recoverable values and recognized an aircraft carrying value adjustment in the 2014 income statement. [Author Note: You may treat this item as “extra” depreciation recorded during the year due to abnormal decline in the asset value.]

• Property, plant, and equipment: Includes land, buildings, aircraft equipment, furniture and fixture, equipment under capital lease, and so on. During 2014, the company acquired equipment under capital leases for $16,987,000. The company also sold equipment with a net book value of $2,501,000 for $684,000 cash. [Author Note: The gain or loss on this sale is combined with some other item in the income statement. Any other change in the gross book value of Property, plant, and equipment may be attributed to outright purchase of other equipment and building construction costs.]

• Capital lease and long-term liabilities: [Author Note: When preparing the cash flow statement, you may find it convenient to combine the current and long-term portions of each of these liabilities.]

• Stock offering: The increases in Common stock and Capital in excess of par accounts are due to a common stock offering completed on August 17, 2014.

• Laundry loan: On June 16, 2014, the company obtained a $10,000,000 loan from a financial institution for a laundry facility in North Las Vegas, Nevada. As of December 31, 2014, $10,000,000 has been drawn down under the loan. Construction of the facility was completed in December 2014. The laundry provides the laundry and dry cleaning services for the Lucky Lady Hotel.

Using the indirect method, prepare the statement of cash flows for the year ended December 31, 2014, in as much detail as possible. For example, borrowing and repayment, if any, should be shown separately as financing inflow and outflow, respectively. Similarly, to the extent that information is available, separately disclose and explain the changes to each asset and each liability account that affected Lucky Lady’s cash flows during 2014.