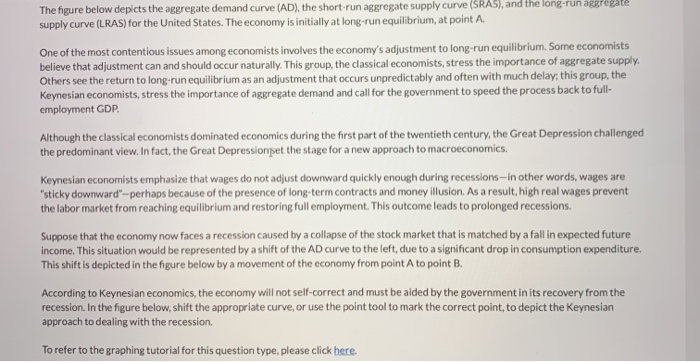 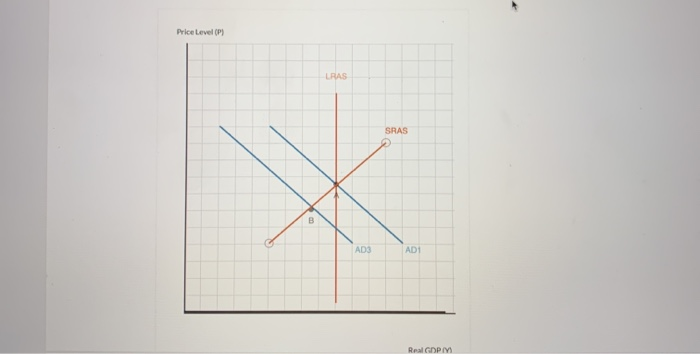 The figure below depicts the aggregate demand curve (AD), the short-run aggregate supply curve (SRAS), and the long-run aggregate supply curve (LRAS) for the United States. The economy is initially at long-run equilibrium, at point A One of the most contentious issues among economists involves the economy&#39;s adjustment to long-run equilibrium. Some economists believe that adjustment can and should occur naturally. This group, the classical economists, stress the importance of aggregate supply. Others see the return to long-run equilibrium as an adjustment that occurs unpredictably and often with much delay, this group, the Keynesian economists, stress the importanoce of aggregate demand and call for the government to speed the process back to full- employment GDP Although the classical economists dominated economics during the first part of the twentieth century, the Great Depression challenged the predominant view. In fact, the Great Depressionpet the stage for a new approach to macroeconomics. Keynesian economists emphasize that wages do not adjust downward quickly enough during recessions-in other words, wages are "sticky downward-perhaps because of the presence of long-term contracts and money illusion. As a result, high real wages prevent the labor market from reaching equilibrium and restoring full employment. This outcome leads to prolonged recessions Suppose that the economy now faces a recession caused by a collapse of the stock market that is matched by a fall in expected future income. This situation would be represented by a shift of the AD curve to the left, due to a significant drop in consumption expenditure. This shift is depicted in the figure below by a movement of the economy from point A to point B. According to Keynesian economics, the economy will not self-correct and must be aided by the government in its recovery from the recession. In the figure below, shift the appropriate curve, or use the point tool to mark the correct point, to depict the Keynesian approach to dealing with the recession. To refer to the graphing tutorial for this question type, please click here Price Level (P) LRAS SRAS B AD3 AD1 Real GDP (Y)