The xyz coordinate system is attached to the box, and XYZ is a parallel stationary coordinate system. The box undergoes a pair of rotations: First, θ1 = 65° about the y axis, followed by θ2 = −145° about the z axis. For this rotation determine (a) the coordinates relative to xyz in its final orientation of the stationary point that was at the location of point E prior to the rotations, (b) the coordinates relative to XYZ of corner E of the box after both rotations. 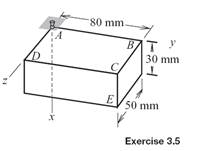