Home / Questions / Rebecca and Walter Bunge have been married for 5 years They live at 883 Scrub Brush Street...

Rebecca and Walter Bunge have been married for 5 years They live at 883 Scrub Brush Street, Apt. 52B, Las Vegas, NV 8912 Rebecca is self-employed and Walt is a high school teacher Rebecca’s Social

In addition, Walt was covered under the Nevada State Teachers’ Pension Plan. Rebecca owns and operates a computer bookstore named ‘‘The Disk Drive.’’ The store is located at 1112 Desert Way, Las Vegas, NV 89130. During 2010, Rebecca had the following income and expenses: 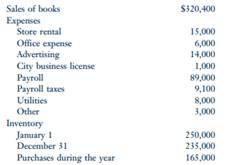 Last year was Rebecca’s first year of operating the book store. Rebecca and Walt elected to carry forward a $5,000 net operating loss from the first year of business into 2010. (Note: Net operating losses are reported on line 21 of Form 1040.) The Bunges own a ski condo in Utah. The condo was rented for 40 days during 2010 and used by the Bunges for 10 days. Pertinent information about the condo rental is as follows:

The above amounts do not reflect any allocation between rental and personal use of the condo. The Bunges are active managers of the condo. This year Rebecca loaned a friend $20,000 so that he could make an investment. Instead of making the investment, the friend lost all the money gambling and left for parts unknown. Rebecca has no hope of ever collecting on this bad debt. Walter, who ordinarily never gambles, won $30,000 at a casino birthday party for one of his friends. This amount should be reported as other income on line 21 of Form 1040.

© 2009-2023 - myCourseHelp.com. All Rights Reserved. The certification names are the trademarks of their respective owners.