Patrick Corporation acquired 100 percent of O’Brien Company’s outstanding common stock on January 1, for $550,000 in cash. O’Brien reported net assets with a carrying amount of $350,000 at that time. Some of O’Brien’s assets either were unrecorded (having been internally developed) or had fair values that differed from book values as follows:

Any goodwill is considered to have an indefinite life with no impairment charges during the year. Following are financial statements at the end of the first year for these two companies prepared from their separately maintained accounting systems. O’Brien declared and paid dividends in the same period. Credit balances are indicated by parentheses. 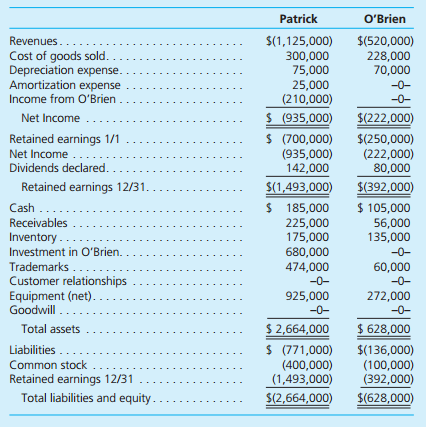 a. Show how Patrick computed the $210,000 Income of O’Brien balance. Discuss how you determined which accounting method Patrick uses for its investment in O’Brien.

b. Without preparing a worksheet or consolidation entries, determine and explain the totals to be reported for this business combination for the year ending December 31.

c. Verify the totals determined in part ( b ) by producing a consolidation worksheet for Patrick and O’Brien for the year ending December 31.