Home / Questions / On January 3 2013 Persoff Corporation acquired all of the outstanding voting stock of Sea...

On January 3 2013 Persoff Corporation acquired all of the outstanding voting stock of Sea Cliff, In in exchange for $6000000 in cash Persoff elected to exercise control over Sea Cliff

On January 3, 2013, Persoff Corporation acquired all of the outstanding voting stock of Sea Cliff, Inc. in exchange for $6,000,000 in cash. Persoff elected to exercise control over Sea Cliff as a wholly owned subsidiary with an independent accounting system. Both companies have December 31 fiscal year-ends. At the acquisition date, Sea Cliff’s stockholders’ equity was $2,500,000 including retained earnings of $1,700,000. Persoff pursued the acquisition, in part, to utilize Sea Cliff’s technology and computer software. These items had fair values that differed from their values on Sea Cliff’s books as follows:

Sea Cliff’s remaining identifiable assets and liabilities had acquisition-date book values that closely approximated fair values. Since acquisition, no assets have been impaired. During the next three years, Sea Cliff reported the following income and dividends:

December 31, 2015, financial statements for each company appear below. Parentheses indicate credit balances. Dividends declared were paid in the same period. 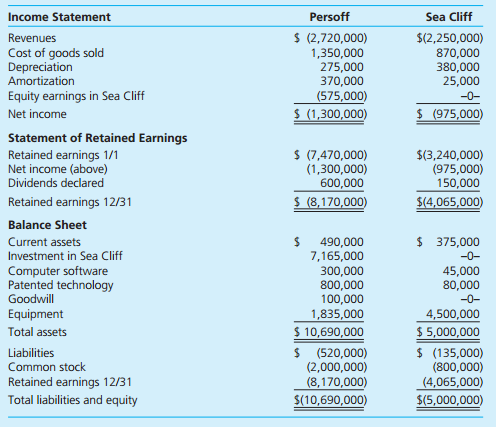 a. Construct Persoff’s acquisition-date fair-value allocation schedule for its investment in Sea Cliff.

b. Show how Persoff determined its Equity earnings in Sea Cliff balance for the year ended December 31, 2015.

d. Prepare a worksheet to determine the consolidated values to be reported on Persoff’s financial statements.