On January 1, Prine, Inc., acquired 100 percent of Lydia Company’s common stock for a fair value of $120,000,000 in cash and stock. Lydia’s assets and liabilities equaled their fair values except for its equipment, which was undervalued by $500,000 and had a 10-year remaining life. Prine specializes in media distribution and viewed its acquisition of Lydia as a strategic move into content ownership and creation. Prine expected both cost and revenue synergies from controlling Lydia’s artistic content (a large library of classic movies) and its sports programming specialty video operation. Accordingly, Prine allocated Lydia’s assets and liabilities (including $50,000,000 of goodwill) to a newly formed operating segment appropriately designated as a reporting unit. The fair values of the reporting unit’s identifiable assets and liabilities through the first year of operations were as follows.

However, Lydia’s assets have taken longer than anticipated to produce the expected synergies with Prine’s operations. Accordingly, Prine reviewed events and circumstances and concluded that Lydia’s fair value was likely less than its carrying amount. At year-end, Prine reduced its assessment of the Lydia reporting unit’s fair value to $110,000,000.

At December 31, Prine and Lydia submitted the following balances for consolidation. There were no intra-entity payables on that date. 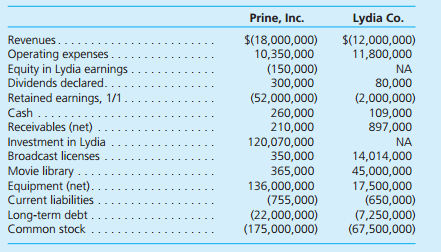 a. What is the relevant initial test to determine whether goodwill could be impaired?

b. At what amount should Prine record an impairment loss for its Lydia reporting unit for the year?

c. What is consolidated net income for the year?

d. What is the December 31 consolidated balance for goodwill?

e. What is the December 31 consolidated balance for broadcast licenses? f. Prepare a consolidated worksheet for Prine and Lydia (Prine’s trial balance should first be adjusted for any appropriate impairment loss).