On January 1, 2014, Parkway, Inc., issued securities with a total fair value of $450,000 for 100 percent of Skyline Corporation’s outstanding ownership shares. Skyline has long supplied inventory to Parkway, which hopes to achieve synergies with production scheduling and product development with this combination. Although Skyline’s book value at the acquisition date was $300,000, the fair value of its trademarks was assessed to be $30,000 more than their carrying amounts. Additionally, Skyline’s patented technology was undervalued in its accounting records by $120,000. The trademarks were considered to have indefinite lives, and the estimated remaining life of the patented technology was eight years. In 2014, Skyline sold Parkway inventory costing $30,000 for $50,000. As of December 31, 2014, Parkway had resold only 28 percent of this inventory. In 2015, Parkway bought from Skyline $80,000 of inventory that had an original cost of $40,000. At the end of 2015, Parkway held $28,000 of inventory acquired from Skyline, all from its 2015 purchases. During 2015, Parkway sold Skyline a parcel of land for $95,000 and recorded a gain of $18,000 on the sale. Skyline still owes Parkway $65,000 related to the land sale. At the end of 2015, Parkway and Skyline prepared the following statements in preparation for consolidation 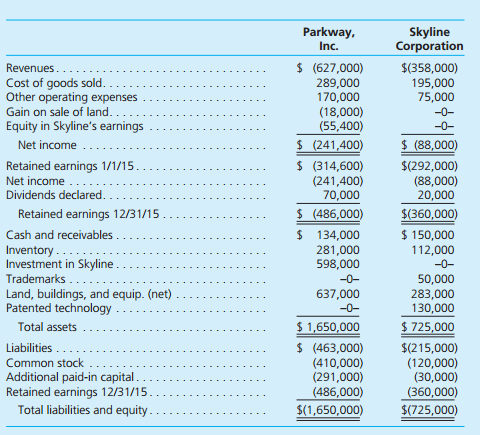 b. Prepare a 2015 consolidated worksheet for Parkway and Skyline.