When Orlando’s Arnold Palmer Hospital began plans to create a new 273-bed, 11-story hospital across the street from its existing facility, which was bursting at the seams in terms of capacity, a massive planning process began. The $100 million building, opened in 2006, was long overdue, according to Executive Director Kathy Swanson: “We started Arnold Palmer Hospital in 1989, with a mission to provide quality services for children and women in a comforting, family-friendly environment. Since then we have served well over 1.5 million women and children and now deliver more than 12,000 babies a year. By 2001, we simply ran out of room, and it was time for us to grow.” The new hospital’s unique, circular pod design provides a maximally efficient layout in all areas of the hospital, creating a patient-centered environment. Service scape design features include a serene environment created through the use of warm colors, private rooms with pull-down Murphy beds for family members, 14-foot ceilings, and natural lighting with oversized windows in patient rooms. But these radical new features did not come easily. “This pod concept with a central nursing area and pie-shaped rooms resulted from over 1,000 planning meetings of 35 user groups, extensive motion and time studies, and computer simulations of the daily movements of nurses,” says Swanson. In a traditional linear hospital layout, called the racetrack design, patient rooms line long hallways, and a nurse might walk 2.7 miles per day serving patient needs at Arnold Palmer. “Some nurses spent 30% of their time simply walking. With the nursing shortage and the high cost of health care professionals, efficiency is a major concern,” added Swanson. With the nursing station in the center of 10- or 12-bed circular pods, no patient room is more than 14 feet from a station. The time savings are in the 20% range. Swanson pointed to Figures 9.21 and 9.22 as examples of the old and new walking and trip distances.* “We have also totally redesigned our neonatal rooms,” says Swanson. “In the old system, there were 16 neonatal beds in a large and often noisy rectangular room. The new building features semiprivate rooms for these tiny babies. The rooms are much improved, with added privacy and a quiet, simulated night atmosphere, in addition to pull-down beds for parents to use. Our research shows that babies improve and develop much more quickly with this layout design. Layout and environment indeed impact patient care!” 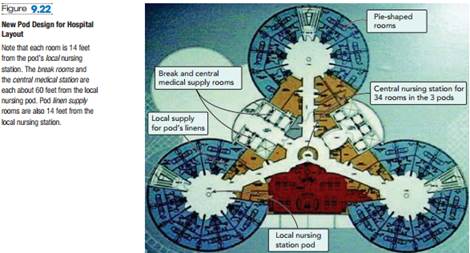 1. Identify the many variables that a hospital needs to consider in layout design. 2. What are the advantages of the circular pod design over the traditional linear hallway layout found in most hospitals?

3. Figure 9.21 illustrates a sample linear hallway layout. During a period of random observation, nurse Thomas Smith’s day includes 6 trips from the nursing station to each of the 12 patient rooms (back and forth), 20 trips to the medical supply room, 5 trips to the break room, and 12 trips to the linen supply room. What is his total distance traveled in miles?

4. Figure 9.22 illustrates an architect’s drawing of Arnold Palmer Hospital’s new circular pod system. If nurse Susan Jones’s day includes 7 trips from the nursing pod to each of the 12 rooms (back and forth), 20 trips to central medical supply, 6 trips to the break room, and 12 trips to the pod linen supply, how many miles does she walk during her shift? What are the differences in the travel times between the two nurses for this random day?

5. The concept of services capes is discussed in this chapter. Describe why this is so important at Arnold Palmer Hospital, and give examples of its use in layout design.

6. As technology and costs change, hospitals continue to innovate. The reduced cost of computers means some hospitals have moved from a central computer at the nurse’s station to computers in the room or on carts (see photo). What changes in overall hospital layout would these innovations suggest?