Home / Questions / Houston Dialysis Center is a department of Houston General Hospital a full service not for...

Houston Dialysis Center is a department of Houston General Hospital, a full-service not-for-profit acute care hospital with 325 beds. The bulk of the hospital’s facilities are devoted to inpatient care and emergency services. However, a 100,000 square-foot section of the hospital complex is devoted to outpatient services. Currently, this space has two primary uses. About 80 percent of the space is used by the Outpatient Clinic, which handles all routine outpatient services offered by the hospital. The remaining 20 percent is used by the Dialysis Center.

The Dialysis Center performs hemodialysis and peritoneal dialysis, which are alternative processes for removing wastes and excess water from the blood for patients with end-stage renal (kidney) disease. In hemodialysis, blood is pumped from the patient’s arm through a shunt into a dialysis machine, which uses a cleansing solution and an artificial membrane to perform the functions of a healthy kidney. Then, the cleansed blood is pumped back into the patient through a second shunt.

In peritoneal dialysis, the cleansing solution is inserted directly into the abdominal cavity through a catheter. The body naturally cleanses the blood through the peritoneum—a thin membrane that lines the abdominal cavity. In general, hemodialysis patients require three dialyses a week, with each treatment lasting about four hours. Patients who use peritoneal dialysis change their own cleansing solutions at home, typically about six times per day. This procedure can be done manually when active or automatically by machine when sleeping. However, the patient’s overall condition, as well as the positioning of the catheter, must be monitored regularly at the Dialysis Center.

Recent growth in volume of the Outpatient Clinic has created a need for 25 percent more space than currently assigned. Because the Outpatient Clinic is much larger than the Dialysis Center, and because its patients need frequent access to other departments within the hospital, the decision was made to keep the Outpatient Clinic in its current location and to move the Dialysis Center to another location to free up space. Such a move would now give the Outpatient Clinic 100,000 square feet, a 25 percent increase.
After attempting to find new space for the Dialysis Center within the hospital complex, it was soon determined that a new 20,000 square foot building must be built. This building will be situated two blocks away from the hospital complex, in a location that is much more convenient for dialysis patients (and Center employees) because of ease of parking. The new space, which can be more efficiently utilized than the old space, allows for a substantial increase in patient volume, although it is unclear whether or not the move will result in additional dialysis patients.

The new dialysis facility is expected to cost $3,000,000. Additionally, furniture and other fixtures, along with relocation expenses of current equipment, would cost $1,000,000, for a total cost of $4,000,000. The funds needed for the new facility will be obtained from a 20-year loan at local bank. The loan (including interest) will be paid off over 20 years at a rate of $400,000 per year. Because the specific financing details are known, it is possible to estimate the actual annual facilities costs for the new Dialysis Center, something that is not possible for units located within the hospital complex.

Table 1 contains the projected profit and loss (P&L) statement for the Dialysis Center before adjusting for the move. The hospital’s department heads receive annual bonuses on the basis of each department’s contribution to the bottom line (profit). In the past, only direct costs were considered, but the hospital’s chief executive officer (CEO) has decided that bonuses would now be based on full (total) costs. Obviously, the new approach to awarding bonuses, coupled with the potential for increases in indirect cost allocation, is of great concern to Linda Rider, the director of the Dialysis Center. Under the current allocation of indirect costs, Linda would have a reasonable chance at an end-of-year bonus, as the forecast puts the Dialysis Center in the black. However, any increase in the indirect cost allocation would likely put her “out of the money.”

At the next department heads’ meeting, Linda expressed her concern about the impact of any allocation changes on the Dialysis Center’s profitability, so the hospital’s CEO asked the chief financial officer (CFO), Roger Hedgecock, to look into the matter. In essence, the CEO said that the final allocation is up to Roger but that any allocation changes must be made within outpatient services. In other words, any change in cost allocation to the Dialysis Center must be offset by an equal, but opposite, change in the allocation to the Outpatient Clinic.
To get started, Roger created Table 2. In creating the table, Roger assumed that the new Dialysis Center would have the same number of stations as the old one, would serve the same number of patients, and would have the same reimbursement rates. Also, operating expenses would differ only slightly from the current situation because the same personnel and equipment would be used. Thus, for all practical purposes, the revenues and direct costs of the Dialysis Center would be unaffected by the move.

The data in Table 2 for the expanded Outpatient Clinic are based on the assumption that the expansion would allow volume to increase by 25 percent and that both revenues and direct costs would increase by a like amount. Furthermore, to keep the analysis manageable, the assumption was made that the overall hospital allocation rates for both facilities costs and general overhead would not materially change because of the expansion.

Roger knew that his “trial balloon” allocation, which is shown in Table 2 in the columns labeled “Initial Allocation,” would create some controversy. In the past, facilities costs were aggregated, so all departments were charged a cost based on the average embedded (historical) cost regardless of the actual age (or value) of the space occupied. Thus, a basement room with no windows was allocated the same facilities costs (per square foot) as was the fifth floor executive suite. Because many department heads thought this approach to be unfair, Roger wanted to begin allocating facilities overhead on a true cost basis. Thus, in his initial allocation, Roger used actual facilities costs ($400,000 per year) as the basis for the allocation to the Dialysis Center.

Needless to say, Linda’s response to the initial allocation was less than enthusiastic, but before Roger was able to address Linda’s concerns, he suddenly left the hospital to take a new position in another city. The task of completing the allocation study was given to you, Houston General’s current administrative resident. You believe that any cost allocation system should be perceived as being “fair,” but you also realize that in practice cost allocation is very complex and somewhat arbitrary. Some department heads argue that the best approach to overhead allocations is the “Marxist approach,” by which allocations are based on each patient service department’s ability to cover overhead costs, but this approach has its own disadvantages.

Considering all the relevant issues, you must develop and justify a new facilities cost allocation scheme for outpatient services. Be prepared to justify your recommendations at the next department heads’ meeting. 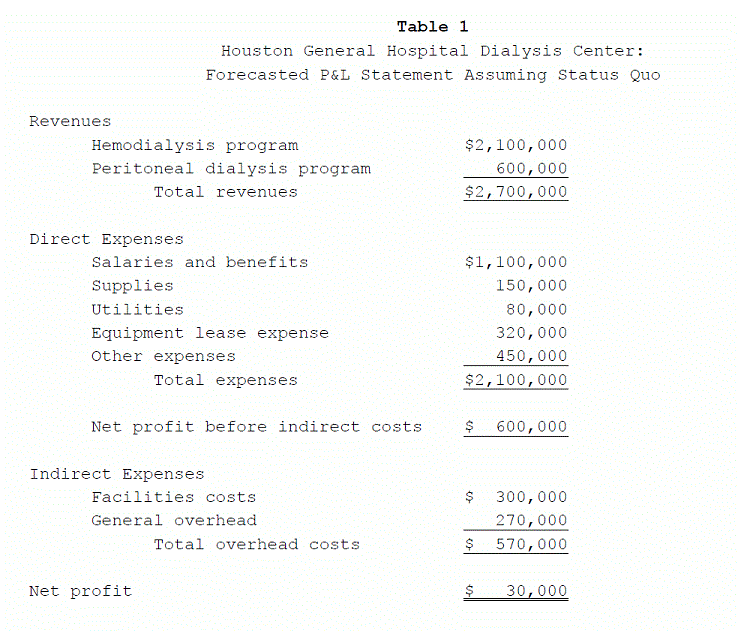 QUESTIONS
1. Is it “fair” for the Dialysis Center to suffer in profitability, and hence
for Linda to possibly lose her bonus, just because the Outpatient Clinic
needs additional space?

2. In the past, the medical center has aggregated all facilities costs, and
then allocated the total amount on the basis of square footage. The proposed
allocation for the Dialysis Center, on the other hand, requires it to bear
the true facilities costs of its new space. What are the advantages and
disadvantages of the new methodology? Do you support the new allocation
scheme?

3. If the new allocation method for facilities costs is implemented, what
should be the facilities allocation to the Dialysis Center in 20 years, when
the loan, and hence total cost of the move, has been paid off and there are
no longer any actual facilities costs?

4. Do you think the new Dialysis Center will be able to attract more patients?
What impact would additional volume have on the facilities allocation
decision?

6. When all issues related to the decision are considered, what is your
recommendation regarding the handling of the pharmacy revenues and the final
allocation amounts?