Extracting Information from the Cash Flow Statement with a Reformulation: Microsoft Corporation (Medium) For many years, Microsoft has generated considerable free cash flow. Up to 2004, it paid no dividends and had no debt to pay off, so it invested the cash in interest-bearing securities. Its balance sheet at the end of its second (December) quarter for fiscal year ending June 2005 reported the following among current assets (in millions of dollars):

You can see a significant reduction in both cash and short-term investments. During the second quarter, Microsoft decided to pay its first dividend in the form of a large special dividend. Exhibit 11.2 gives the cash flow statement for the quarter, along with a note on interest received on the investments listed above. The firm&#39;s tax rate is 37.5 percent. Answer the following questions about the quarter ended December 31, 2004:

a. What were the cash dividends paid to common shareholders?

b. What was the net dividend paid out to shareholders?

c. Calculate (unlevered) cash flow from operations for the quarter.

f. Why was the "net cash from investing" number reported for 2004 so different from that for 2003? Is the large difference due to a change in Microsoft&#39;s investment in its operations?

g. Microsoft maintains $60 million in operating cash. What was its net investment in financial assets during the quarter (before any effect of exchange rates)? After answering these questions, you have the ingredients to construct a reformulated cash flow statement. Go ahead and do it. 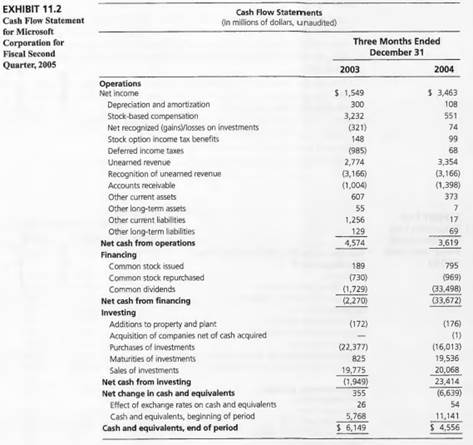