Home / Questions / dlight How bringing its business plan to life Helped a social enterprise get Off to a stro...

d.light: How bringing its business plan to life Helped a social enterprise get Off to a strong start 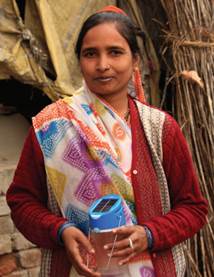 updated frequently. These numbers reflect the impact of the availability of light, produced by d.light solar lanterns, for people who didn’t previously have access to reliable electricity and light. The numbers are remarkable, particularly in terms of lives empowered, school-aged children reached with solar lighting, and savings in energy-related expenses. The numbers reflect the good that a well-managed social enterprise can create. 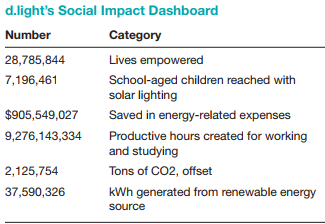 d.light sells its product through a number of channels in more than 30 countries. One strategy that has worked well is to employ “rural entrepreneurs” to sell the product. d.light likes to employ indigenous personnel, who know the local customs, people, and language, to sell its product on a commission basis. It also has partnerships with NGOs, microfinance organizations, and social enterprise start-ups that are producing solar lanterns to achieve the same goals it is striving towards. In 2013, d.light entered into a major partnership with Total, a french oil and gas company that sells d.light’s products as part of the “Access to Energy Program” throughout Africa. As a result of the Total partnership, and its initiatives across the world, d.light now makes more than 500,000 of its solar lanterns per month. The first few years of its existence, d.light’s production was more in the neighborhood of 20,000 to 30,000 units per month. d.light has funded its operations and growth through both investment capital and earnings. d.light is also continually updating its products. for example, its newest design incorporates a smartphone charger, knowing smartphones are the lifeline of many small business owners and others in developing countries. Indian mother of three with her d.light solar-powered lamp. challenges ahead As it continues to grow, d.light faces a host of challenges. The problem it is trying to solve, to provide a reliable source of light to people without access to electricity, is as large as ever. The United Nations now estimates that over 2 billion people in the world do not have access to reliable electricity. Incredibly, that number is higher than when d.light was founded in 2007. Its for-profit status is also periodically challenged. A 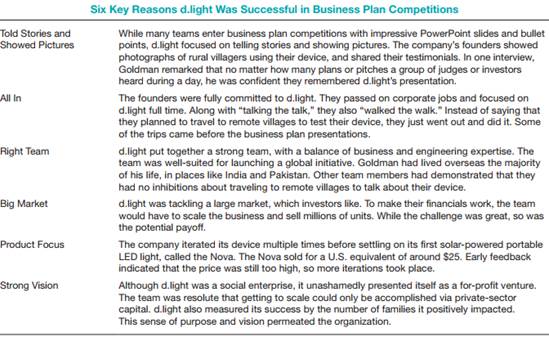 d.light lantern costs the equivalent of 30 U.S. dollars, an amount that remains beyond the reach of many people in underdeveloped countries. Some observers believe that companies like d.light should be nonprofits and give their lanterns away. d.light’s counter to this argument is that the only way to effectively tackle the worldwide shortage of reliable lighting is to stimulate business activity through the private sector. How can an entrepreneur in Kenya, the company argues, make a living selling solar lights if a nearby NGO is giving them away for free? d.light also continues to face the challenge of convincing hesistant customers with a little extra income to invest in unfamiliar technology. Although kerosene has many harmful side effects, it is an integral part of many villagers’ lives. It often takes an influential person in a village buying a d.light lantern for others to follow suit. d.light is also continually trying to lower the price point of its basic lanterns. d.light’s efforts have clearly made a difference in the lives of millions of people. The firm has received numerous awards to recognize what it has accomplished. One particularly nice distinction is its place in the British Museum’s History of the World in 100 Objects. d.light’s basic lantern, the S250, is object number 100 in the collection. d.light’s stated goal is to impact the lives of at least 100 million people by 2020. It appears to be well on its way to achieving the goal.

1. Why is the problem of bringing light to people who don’t have access to reliable electricity not being tackled in a meaningful way by a large lighting company, such as GE (General Electric) or Philips?

2. What qualities do Sam Goldman and his team have that will help them solve the problem of providing light to the billions of people in the world who lack access to reliable electricity?

3. Why does Sam Goldman go out of his way to talk about the importance of d.light’s business plan? In what ways do you think having a meticulously created business helped d.light in its launch efforts?

4. If you were one of d.light’s founders, what would your marketing strategy be? How would you go about educating people in remote areas of the world about your product and the beneifts associated with purchasing it?