Home / Questions / Dante Development Corporation is considering bidding on a contract for a new office buildi...

Dante Development Corporation is considering bidding on a contract for a new office building complex. The following figure shows the decision tree prepared by one of Dante’s analysts. At node 1, the company must decide whether to bid on the contract. The cost of preparing the bid is $200,000. The upper branch from node 2 shows that the company has a 0.8 probability of winning the contract if it submits a bid. If the company wins the bid, it will have to pay $2 million to become a partner in the project. Node 3 shows that the company will then consider doing a market research study to forecast demand for the office units prior to beginning construction. The cost of this study is $150,000. Node 4 is a chance node showing the possible outcomes of the market research study. Nodes 5, 6, and 7 are similar in that they are the decision nodes for Dante to either build the office complex or sell the rights in the project to another developer. The decision to build the complex will result in an income of $5 million if demand is high and $3 million if demand is moderate. If Dante chooses to sell its rights in the project to another developer, income from the sale is estimated to be $3.5 million. The probabilities shown at nodes 4, 8, and 9 are based on the projected outcomes of the market research study. 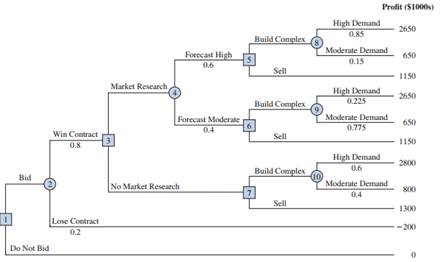 a. Verify Dante’s profit projections shown at the ending branches of the decision tree by calculating the payoffs of $2,650,000 and $650,000 for first two outcomes.

b. What is the optimal decision strategy for Dante, and what is the expected profit for this project?