Consider again the CHB Inc. problem described in Problem 10. Suppose only a limted number of PPBs can be placed. CHB would like to place this limited number of PPBs in counties so that the allowable branches can reach the maximum possible population. The file CHBPop contains the county adjacency matrix described in Problem 10 as well as the population of each county.

b. Suppose that two PPBs can be established. Where should they be located to maximize the population served?

CHB, Inc. is a bank holding company that is evaluating the potential for expanding into the state of Ohio. State law permits establishing branches in any county that is adjacent to a county in which a PPB (principal place of business) is located. The following map shows the State of Ohio. The file CHB contains an adjacency matrix with a one in the ith row and jth column indicating that the counties represented by the ith row and the jth column share a border. A zero indicates that the two counties do not share a border. Formulate and solve a linear binary model that will tell CHB the minimium number of PPB’s required and their location in order to allow CHB to put a branch in every county in Ohio. 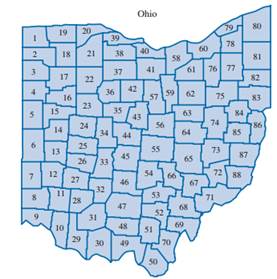