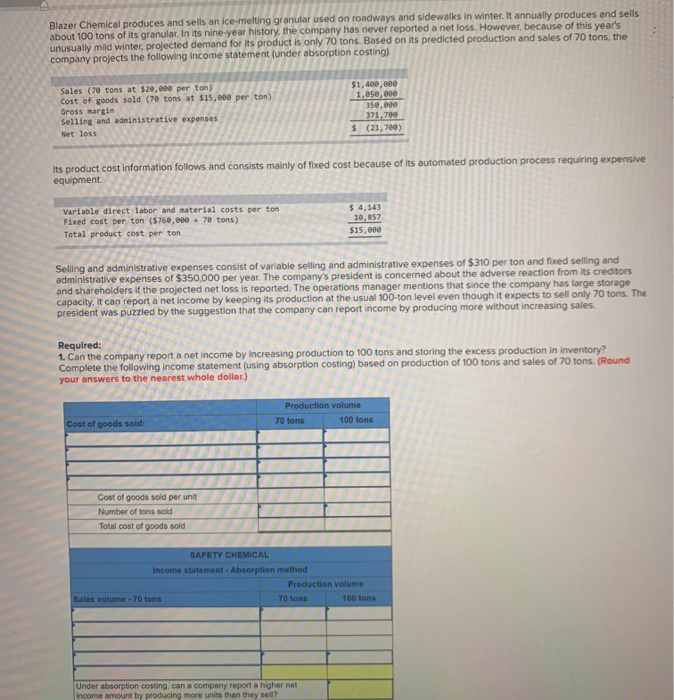 Blazer Chemical produces and sells an ice-melting granular used on roadways and sidewalks in winter. It annually produces and sells about 100 tons of its granular. In its nine-year history, the company has never reported a net loss. However, because of this year&#39;s unusually mild winter, projected demand for its product is only 70 tons. Based on its predicted production and sales of 70 tons, the company projects the following income statement (under absorption costing). $1,400,00e 1,0se, e00 35e,eee 371,78e Sales (7e tons at $20,000 per ton) Cost of goods sold (7e tons at $15,000 per ton) Gross margin Selling and administrative expenses $ (21,700) Net loss Its product cost information follows and consists mainly of fixed cost because of its automated production process requiring expensive equipment $ 4,143 Variable direct labor and material costs per ton Fixed cost per ton ($760, eee+7e tons) 10,857 $15,000 Total product cost per ton Selling and administrative expenses consist of variable selling and administrative expenses of $310 per ton and fixed selling and administrative expenses of $350,000 per year. The company&#39;s president is concerned about the adverse reaction from its creditors and shareholders if the projected net loss is reported. The operations manager mentions that since the company has large storage capacity, it can report a net income by keeping its production at the usual 100-ton level even though it expects to sell only 70 tons. The president was puzzled by the suggestion that the company can report income by producing more without increasing sales Required: 1. Can the company report a net income by increasing production to 100 tons and storing the excess production in inventory? Complete the following income statement (using absorption costing) based on production of 100 tons and sales of 70 tons. (Round your answers to the nearest whole dollar.) Production volume 100 tons 70 tons Cost of goods sold: Cost of goods sold per unit Number of tons sold Total cost of goods sold SAFETY CHEMICAL Income statement Absorption method Production volume 100 tons 70 tons Sales volume-70 tons Under absorption costing, can a company report a higher net income amount by producing more units than they sell?