In November 2015, John Wells, a customer service representative of Bayfield Mud Company, was summoned to the Houston warehouse of Wet-Land Drilling, Inc., to inspect three boxcars of mud treating agents that Bayfield had shipped to the Houston firm. (Bayfield’s corporate offices and its largest plant are located in Orange, Texas, which is just west of the Louisiana–Texas border.) Wet-Land had filed a complaint that the 50-pound bags of treating agents just received from Bayfield were short-weight by approximately 5%. The short-weight bags were initially detected by one of Wet Land’s receiving clerks, who noticed that the railroad scale tickets indicated that net weights were significantly less on all three boxcars than those of identical shipments received on October 25, 2015. Bayfield’s traffic department was called to determine if lighter-weight pallets were used on the shipments. (This might explain the lighter net weights.) Bayfield indicated, however, that no changes had been made in loading or palletizing procedures. Thus, Wet-Land engineers randomly checked 50 bags and discovered that the average net weight was 47.51 pounds. They noted from past shipments that the process yielded bag net weights averaging exactly 50.0 pounds, with an acceptable standard deviation s of 1.2 pounds. Consequently, they concluded that the sample indicated a significant short-weight. (The reader may wish to verify this conclusion.) Bayfield was then contacted, and Wells was sent to investigate the complaint. Upon arrival, Wells verified the complaint and issued a 5% credit to Wet-Land. 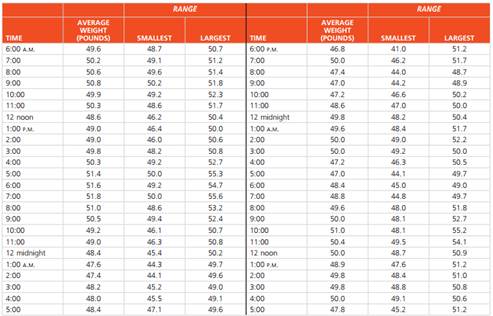 Wet-Land management, however, was not completely satisfied with the issuance of credit. The charts followed by their mud engineers on the drilling platforms were based on 50-pound bags of treating agents. Lighter-weight bags might result in poor chemical control during the drilling operation and thus adversely affect drilling efficiency. (Mud-treating agents are used to control the pH and other chemical properties of the core during drilling operation.) This defect could cause severe economic consequences because of the extremely high cost of oil and natural gas well drilling operations. Consequently, special-use instructions had to accompany the delivery of these shipments to the drilling platforms. Moreover, the short-weight shipments had to be isolated in Wet-Land’s warehouse, causing extra handling and poor space utilization. Thus, Wells was informed that Wet-Land might seek a new supplier of mud-treating agents if, in the future, it received bags that deviated significantly from 50 pounds. The quality control department at Bayfield suspected that the lightweight bags might have resulted from “growing pains” at the Orange plant. Because of the earlier energy crisis, oil and natural gas exploration activity had greatly increased. In turn, this increased activity created increased demand for products produced by related industries, including drilling muds. Consequently, Bayfield had to expand from a one-shift (6:00 a.m. to 2:00 p.m.) to a two-shift (2:00 p.m. to 10:00 p.m.) operation in mid-2010, and finally to a three-shift operation (24 hours per day) in the fall of 2015.

The additional night-shift bagging crew was staffed entirely by new employees. The most experienced foremen were temporarily assigned to supervise the night-shift employees. Most emphasis was placed on increasing the output of bags to meet ever-increasing demand. It was suspected that only occasional reminders were made to double-check the bag weight-feeder. (A double-check is performed by systematically weighing a bag on a scale to determine if the proper weight is being loaded by the weight-feeder. If there is significant deviation from 50 pounds, corrective adjustments are made to the weight-release mechanism.) To verify this expectation, the quality control staff randomly sampled the bag output and prepared the chart on the previous page. Six bags were sampled and weighed each hour.

1. What is your analysis of the bag-weight problem?

2. What procedures would you recommend to maintain proper quality control?