Home / Questions / Assume that the ISP in the previous problem decided to use token buckets of capacity c 20...

Assume that the ISP in the previous problem decided to use token buckets (of capacity c = 20 and rate r = 10) instead of leaky buckets to give credit to the customer that does not send cells for a while but needs to send some bursts later. Each token bucket is implemented by a very large queue for each customer (no packet drop), a bucket that holds the token, and the timer that regulates dropping tokens in the bucket. (See Figure 30.17.) 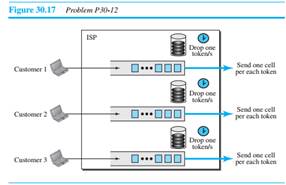