A. Prepare an amortization table for this installment note similar to the one presented in Exhibit 4

B. Journalize the entries for he issuance of the and the four annual note payments.

C. Describe how the annual note payment would be reported in the 2016 income statement. 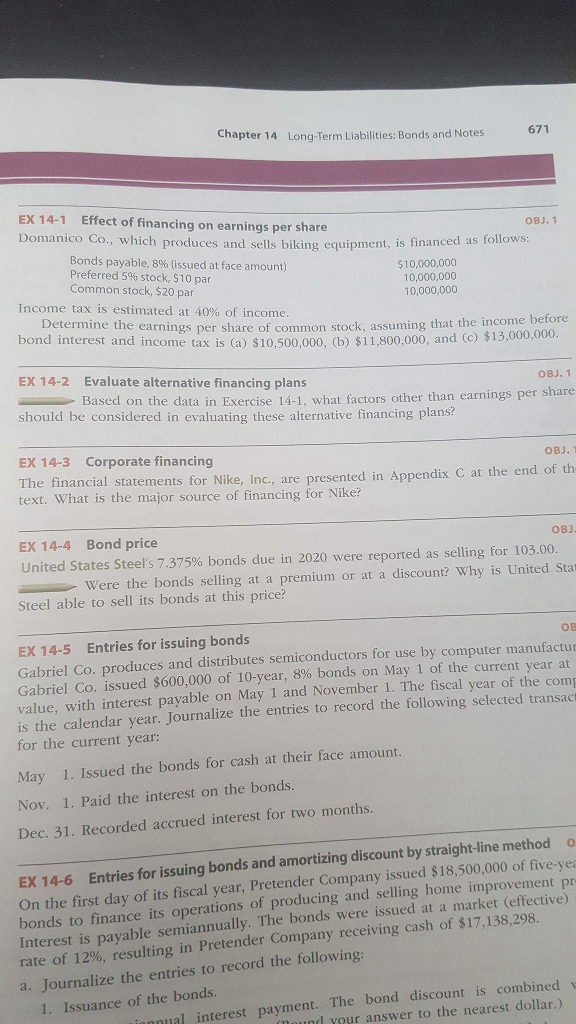 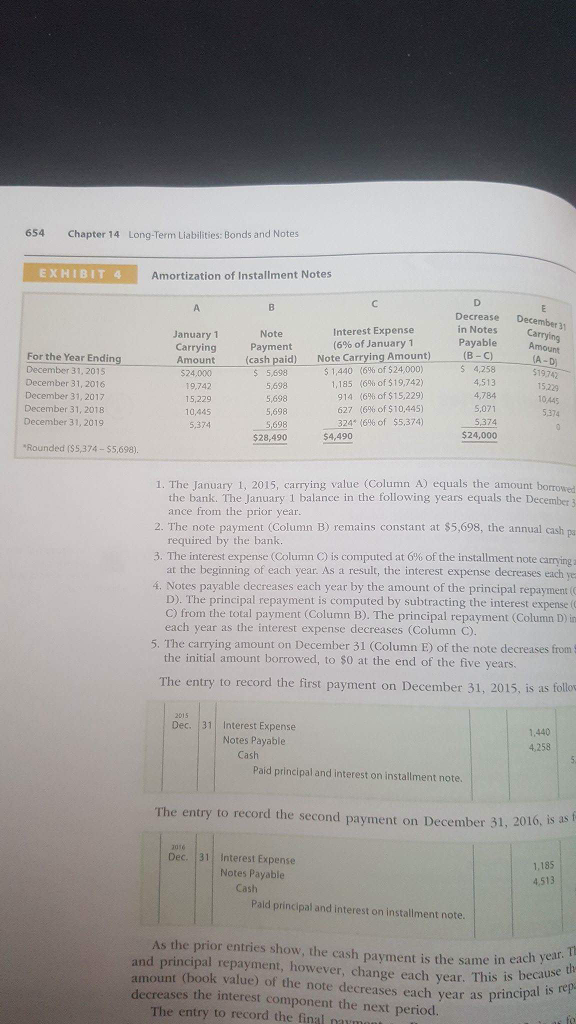 Chapter 14 Long-Term Liabilities: Bonds and Notes Ex 14-1 Effect of financing on earnings per share OBJ, 1 Domanico Co., which produces and sells biking equipment, is financed as follow Bonds payable, 8% (issued at face amount) $10,000,000 Preferred 5% stock, $10 par 10,000,000 Common stock, $20 par 10,000,000 Income tax is estimated at of income the per of common stock, assuming that the income before bond interest and income tax is (a) and $13,000,000 EX 14-2 Evaluate alternative financing plans share Based the data in Exercise 14-1, what factors other than earnings per shou be considered in evaluating these alternative financing plans OBJ EX 14-3 Corporate financing are presented in Appendix C at the end of th The financial statements for Nike, nC text. What is the major source of financing for Nike? OBJ EX 14-4 Bond price for 103.00. United States Steel's 7.375% bonds due in 2020 were reported as selling Sta Were the bonds se ng at a premium or at a discount? Why is United Steel able to sell its bonds at this price? EX 14-5 Entries for issuing bonds manufactur Gabriel Co. produces and distributes semiconductors for use by computer year Gabriel Co. issued $600,000 of 10-year, 8% bonds on May 1 of the current com value, with interest payable on May 1 and November 1. The fiscal year of the is the calendar year. Journalize the entries to record the following selected transact for the current year: face amount May 1. Issued the bonds for cash at their Nov. 1. Paid the interest on the bonds Dec. 31. Recorded accrued interest for two months Ex 14-6 Entries for issuing bonds and amortizing discount by straight line method pr On the first day of its fiscal year, Pretender Company issued $18,500,000 of five bonds to finance its operations of and selling home improvement The bonds were issued at a market Interest is payable receiving cash of rate of 12%, resulting in Pretender Company a. Journalize the entries to record the following: payment. The bond discount is combined nearest dolla 1. Issuance of the bonds. interest