Home / Questions / A student at a certain university will pass the oral Ph D qualifying examination if at lea...

A student at a certain university will pass the oral Ph.D. qualifying examination if at least two of the three examiners pass her or him. Past experience shows that (a) 15% of the students who take the qualifying exam are not prepared, and (b) each examiner will independently pass 85% of the prepared and 20% of the unprepared students. Kevin took his Ph.D. qualifying exam with Professors Smith, Brown, and Rose. What is the probability that Professor Rose has passed Kevin if we know that neither Professor Brown nor Professor Smith has passed him? Let S, B, and R be the respective events that Professors Smith, Brown, and Rose have passed Kevin. Are these three events independent? Are they conditionally independent given that Kevin is prepared? (See Exercises 43 and 44, Section 3.5.)

(a) her first son is hemophilic;

(b) her second son is hemophilic; 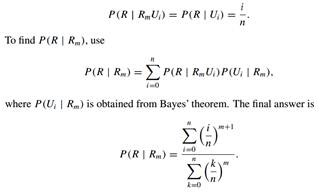 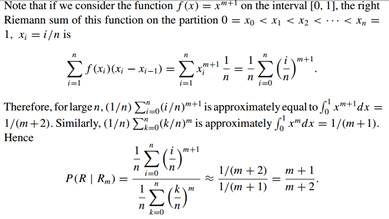 Laplace designed and solved this problem for philosophical reasons. He used it to argue that the sun will rise tomorrow with probability (m+1)/(m+2) if we know that it has risen in the m preceding days. Therefore, according to this, as time passes by, the probability that the sun rises again becomes higher, and the event of the sun rising becomes more and more certain day after day. It is clear that, to argue this way, we should accept the problematic assumption that the phenomenon of the sun rising is “random,” and the model of this problem is identical to its random behavior.